If you’re looking for something to do during these last days of summer, why not stay cool inside and read?

Sylvan Dell Publishing is saving you a trip to the library, as they have just released a 90-day “free-for-all” of over 45 enriching and inspiring children’s titles available for free online in eBook format! Sylvan Dell’s e-books feature interactive educational stories for kids which you can read yourself right from your computer. You can also choose to have a narrated version of the books read to you (or if you’re a parent, to your child) in English or in Spanish!

Read the Whistling Wings eBook:
http://www.sylvandellpublishing.com/ebooktrials.php?e=MSBL9J
Posted by Amazing Kids! at 1:03 PM No comments: Links to this post

Are you an adult who loves to write and inspire kids? Do you have a knack for news? Do you want to help Amazing Kids! get the word out about our amazing programs and articles?

Amazing Kids! is putting out our call for a Volunteer Public Relations Director who can manage and edit our current blogs and news sites, as well as manage press releases and coordinate publicity communications for us.

If you have good experience with the internet, are a good communicator, and wouldn’t mind volunteering for 5-10 hours a week, please contact info@amazing-kids.org and let us know that you’re interested, with:

Your Experience as a Writer or PR Coordinator, if applicable

Why you want are interested in this position, and how you can help

Please let us know asap, and thanks for your support!
Posted by Amazing Kids! at 1:36 PM No comments: Links to this post 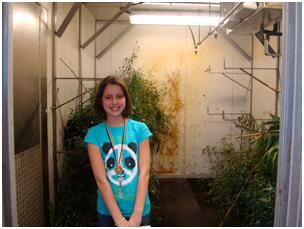 Our Jr. Asst. Editor, Natalie, stands in the bamboo cooler? Yup. That’s right. A fridge for panda food! Read Giants of Nature: Giant Pandas to find out why! 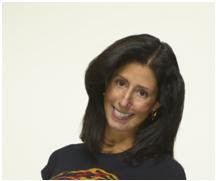 Did you know that Melina Bellows, Editor-in-Chief of National Geographic Kids Magazine wanted to design Hallmark Greeting Cards when she was a kid? Get more cool facts in our exclusive interview! 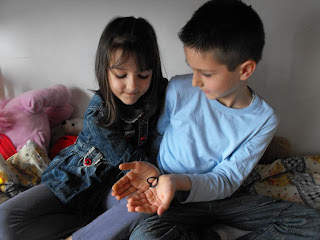 This picture was taken by a young, award-winning artist and photographer in Romania! If you like art and photography, then check out our NEW Amazing Artists Column to see pictures and art sent in by kids like you! Send your art to: editor@amazing-kids.org 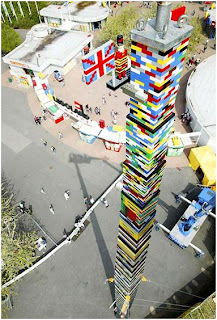 Want to build a tall tower? You can build one just like this…if you have 500,000 Lego bricks lying around, and a few cranes to support it. Learn more about engineering marvels in Building Big, by Assistant Editor, Sean.
Like what you see? Write for Us, Subscribe, Donate, or spread the word to your friends and school to keep the Amazing Kids! Online Magazine full of amazing-ness, today!
Posted by Amazing Kids! at 8:39 AM No comments: Links to this post 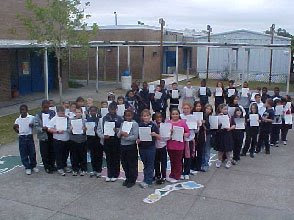 What would you do if your friend was in trouble? Nearly 4 years ago, a Hurricane Katrina swept over Louisiana, ruining houses and buildings forever. Lots of kids who lived in Louisiana needed a good friend as the aftermath became clear, but all of the kids around them were equally as devastated by the hurricane, and needed a friend, too.

Amazing Kids! quickly went to work, and Alyse Rome, Founder and President began the Amazing Kids! PenPals Program, which has connected countless friends across the world and is still active, today, for any kid who wants to join!

“The Amazing Kids! PenPals for Hurricane Survivors Program is the lightening-rod that encouraged Estelle students to write their stories, in letter form, to share with a new pen pal friend,” said the teachers at Estelle Elementary School in Jefferson Parish, Louisiana.

It was a truly touching experience for everyone involved; kids who had been devastated now had a hope, a friend, and best of all, a kid their own age to share their feelings with. It clearly worked, and kids are still benefiting from their friendships with their Amazing Kids! PenPal, today! You can have a PenPal, too!

What do you think about friends? How would you help kids hurting from a hurricane? Do you think writing to other kids about your feelings would help you if you had gone through a disaster? Tell us what you think by commenting!
Posted by Amazing Kids! at 7:30 AM No comments: Links to this post 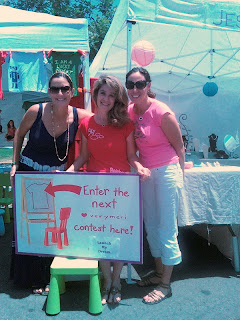 Thanks to all who came to the verymeri booth at the Brentwood Market on Sunday to design their t-shirt for the kick-off of the 2nd Annual Amazing Kids! Launch My Dream! T-Shirt Design Contest!

We had a great turnout, made some new friends, and met lots of terrific people and some truly amazing kids!

A special "thank you" to Meri (on the right of the photo) and Suzanne Gelfound (center of photo), both from verymeri, for hosting the event in their booth at the Brentwood Market. (That's me, Amazing Kids! Founder and President, Alyse Rome, in the blue dress, standing with Meri and Suzanne on the left of the photo.) 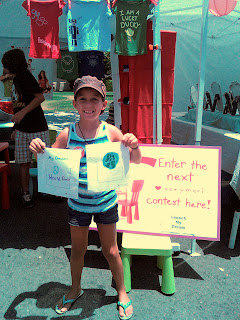 Calling all Creative Kids! If you're are a kid between the ages of 6 and 17, and have an amazing dream you want to launch, then stay tuned for our 2nd Annual Amazing Kids! "Launch My Dream!" T-Shirt Design Contest!

The contest rules should be up on the Amazing Kids! website (www.amazing-kids.org) in the next couple of days, so be sure to check back soon!

Good luck, everyone-- and have fun getting ready to launch your amazing dream!
Posted by Alyse Rome at 10:09 PM 1 comment: Links to this post 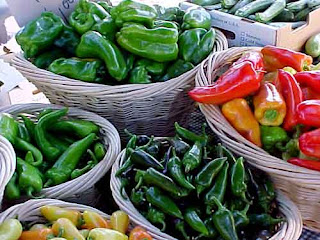 Join Amazing Kids! (www.amazing-kids.org) and our charity t-shirt company partner Verymeri.com this Sunday, July 19, from 9 am-1 pm at the Brentwood Farmers Market!

We're kicking off the start of our 2nd Annual Launch My Dream! T-Shirt Design Contest, 2009! Kids and teens ages 5 to 17 can participate by creating a design that illustrates their dream for their amazing future.

The 2nd Annual Launch My Dream! T-Shirt Design Contest rules will be posted on the Amazing Kids! website soon, so be sure to check back in the coming days! Good luck and see you at the Brentwood Market on Sunday!
Posted by Alyse Rome at 7:10 PM No comments: Links to this post

A Message from Command Central 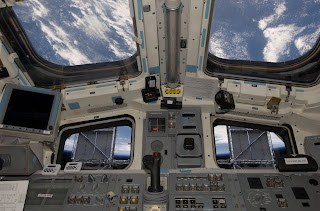 The Amazing Kids! Online Magazine’s next theme (picked by our amazing Assistant Editor, Sean!) is To Space and Beyond! Of course, we are planning some super-cool articles from the volunteer youth staff, but if you’re a kid (ages 17 and under), we want to see your work, too! We accept:
Fiction Stories
Poems
Artwork
Jokes
Recipes
Non-Fiction articles
Reviews

If you don’t want to write or draw about space, that’s ok! We’ll review any material sent in by kids, as long as it’s kid-friendly. Send your writing and art to: editor@amazing-kids.org. If you want to send in a space-themed article, please send it before August 5th; this issue will be launched in September! Please let us know if you have any questions, and have a great Summer!
(photo courtesy NASA)
Posted by Amazing Kids! at 7:04 AM No comments: Links to this post 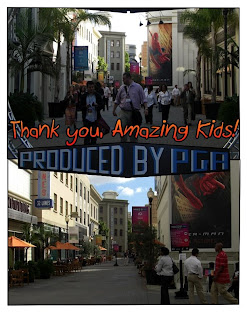 What if you got the chance to observe and learn from the best producers in the industry? With the help of Amazing Kids!, I was given the incredible opportunity! Paired with animation producer, Helen Kalafatic, (best known for her work on Spongebob Squarepants, Maya and Miguel, and more!) we took to the panels of the “Produced by 2009” conference at Sony Pictures Studio. On arrival, Helen and I got our passes and continued to the lecture of our choice; "Who Does What? The Role of The Creative Producer".

We found some seats and listened to the three speaking producers. Lucy Fisher and Dough Wick, being two of the three, are Co-Heads of Red Wagon Entertainment and have produced such films as Memoirs of a Geisha and the Stuart Little films. The third speaker, Kathleen Kennedy, may be best known for her recent works in The Curious Case of Benjamin Button and Indiana Jones and the Kingdom of the Crystal Skull. However, she also produced many famous classic movies! E.T., Back To The Future, Jurassic Park, and Schindler's List were all made possible by Ms. Kennedy. You can imagine the stories she has to share! While writing E.T., a film about a friendly alien, they had hit a wall in their creative process. How would NASA react if they discovered a creature from space? The studio had to send Kathleen Kennedy to go ask NASA themselves! Also, the speakers told a story about an action favorite called "The Fugitive". They had started production on the film, before they had an ending to the script! They considered it a miracle that the movie turned out as it did and with so much success!

Helen and I left the auditorium having learned a lot about producing! Helen was surprised by the similarities between live-action producing and animation producing, while I was surprised how last minute the process can be! We had such a great time and really learned a lot! Thank you, Amazing Kids! for making it all possible!
Posted by Amazing Kids! at 8:18 AM 2 comments: Links to this post

In celebration of its eleventh year helping kids worldwide realize their amazing potential, Amazing Kids! has re-launched its premier website for children: http://www.amazing-kids.org/ Easy-to-navigate and sporting a fresh new look, the redesigned website is not your typical redesign conceived and executed by adults; amazing-kids.org has in fact been recreated entirely by a dedicated team of kids.

To keep up with the unprecedented growth the organization experienced this past year, Alyse, as founder and publisher of the Amazing Kids! eZine, lead her team of student volunteers throughout the historic redesign, resulting in one of the most significant changes in the history of Amazing Kids!

The team included Amazing Kids!’ webmaster, Braxton, age 15, an Amazing Kids! volunteer for nearly 3 years, and his sister Brittany, age 17, the eZine Editor-in-Chief, a 3+ year volunteer. The two worked diligently to redesign the entire website, bringing their colorful concepts into reality. Volunteering for such an important cause inspired Braxton. The redesign showcases his impressive creative talents and technical know-how.

“I learned a lot,” Braxton says. “Patience is the key to getting to the finish line. At times it was hard, but we managed to get through as a team. This process has helped me realize my own amazing potential.”

Says Brittany: “We are so thankful for the help we received. It took hard work and dedication. That speaks for much of our dreams and goals in life: Those who are persistent, surrounding themselves with the right help are apt to gain the prize.”

Visit the new website amazing-kids.org, then let us know what you think by leaving your comments, here! :-)

####
Amazing Kids!
Celebrating its 11th year anniversary, Amazing Kids! is an internationally-recognized children’s educational charity based in Southern California with a worldwide following through their award-winning website, amazing-kids.org. Their mission: helping kids realize their potential.
Posted by Amazing Kids! at 1:33 PM 1 comment: Links to this post